While teaching a recent general chemistry class I was asked whether astatine should be considered a halogen. I realized that throughout my undergraduate years, the halogens had always been assumed to stop at iodine, but to my embarrassment I had never fully researched why. Even its placement as element 85 begs the question, does astatine continue the vertical trend of the halogens, or the diagonal trend of the metalloids? In this series of posts I hope to address this question in a manner thorough enough for future graduate student TA's who work in other areas of chemistry, but still generally approachable to interested non-chemists. 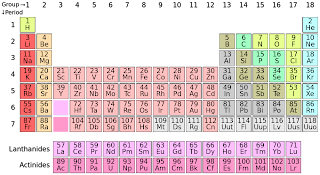 First of all, what of the experimental evidence? Unfortunately, this question is a great deal more difficult to answer than it appears. The name astatine itself comes from the greek αστατος (astatos), 'unstable,' and rightly so--all isotopes of astatine are highly radioactive. According to the CRC Handbook, most isotopes of astatine have a half-life on the order of a second or less. The longest lived isotopes are astatine-210, with a half-life of 8.1 hours, and astatine-211, with a half-life of 7.2 hours. Most isotopes of astatine undergo both α and β decay, with α predominant for the lighter isotopes (up to about 201At) and β predominant for the heavier isotopes (202At and beyond). A couple of isotopes also undergo electron capture, most notably 211At.

The rapid radioactive decay means that only very small amounts of astatine are ever present on Earth. Astatine is produced in nature by decay of heavier elements, and estimates vary from a few hundred milligrams to 30 grams exist in nature at any given time. The most stable isotopes of 210At and 211At, although not produced in nature through any known decay mechanism, can be produced in the laboratory by bombarding bismuth-209 with an α-beam.

The above poses two problems experimentally. First, and more obviously, any astatine you're working with keeps rapidly disappearing. More importantly, astatine produces a great deal of heat. How much? The half-life of 210At is 8.1 hours, or 29,160 seconds. Radioactive decay has first order kinetics, so this directly translates to a rate constant of 2.4 • 10-5/s. This may not look impressive at first, but let us take a hypothetical 100 milligram sample--about 1⁄2000 mol--of 210At (never mind how we managed to get it in the first place). When we multiply the number of atoms by the decay rate, we find a whopping 6.8 • 1015 decay events the first second (i.e. 6.8 PBq).

This much energy will easily produce enough heat to immediately vaporize our sample. This can be seen as follows: If we estimate that each decay event adds 1 MeV of energy (reasonable for β decay, and actually rather low for α decay), our sample will create over a kilojoule of heat in one second! We see just how much more powerful nuclear reactions are than chemical ones. Thus it is currently effectively impossible for macroscopic quantities of astatine to exist in the condensed phase, although advances in techniques of cooling small quantities under study may conceivably change this in the near future.

The only way to conduct any studies on astatine is to do so either in the gas phase or, more commonly, in a dilute solution where the solvent will absorb the heat produced. Due to the extremely low concentrations used in solution, generally on the order of 10-11 to 10-15 M, the results are not necessarily as definitive as we might like. Such experiments have indicated that astatine forms HAt, various salts such as LiAt, halogen-like bonds to organic molecules, and interhalogens such as AtI (see, for example, an old but non-paywalled article here, and a free preview from google books here).

This all seems to strongly indicate that astatine is indeed a halogen. Unfortunately, things are actually not so clear cut. Like a metal, astatine readily forms At+ in acidic solution, and HAt may in fact be not hydroastatic acid, but astatine hydride, dissociating into At+ and H-. Indeed, Corson et al. in the original paper on the topic classify astatine as a metal based on its chemical properties. Among their most interesting findings, Corson et al. report the Ag+ fails to precipitate astatine, in strong contrast to what would be expected were astatine a halogen.

More importantly, it is not clear whether condensed astatine (before it vaporizes) would behave as a diatomic halogen or as a metal--or possibly as some intermediate between the two. Many earlier papers predicted that astatine would be a metalloid based on its predicted band structure and as its position on the periodic table might suggest, while the most recent papers generally predict metallic characteristics for pure astatine (the previous link is from an author, and should avoid the paywall; if it doesn't work the original paywalled version is available here).

To understand why astatine will exhibit strong metallic characteristics in certain cases we will need to examine its electronic structure, but to do this we will first need to take a brief foray into relativistic quantum mechanics. Coming roughly next week--or exactly whenever I manage to carve out enough time to get it written-- Update: click here for "Astatine: Halogen or Metal? Part 2: Introduction to Relativistic Quantum Chemistry." Or, to skip to the chase, click here for "Astatine: Halogen or Metal? Part 3: Electronic Structure Calculations."